A dreary and stormy morning delayed the campers from planting native plants in the Sarita Wetland, so instead they headed inside for water testing. A few different things were tested: dissolved oxygen levels, pH, as well as turbidity. The campers saw different results depending on where they got their water from, the most notable difference being before and after traveling through the wetland. When the water leaves Sarita, it has a slightly lowered turbidity and a more neutral pH than when it came in. This testing taught campers that water quality can change throughout its journey, especially after the positive filtering effects of a wetland.

Additionally, the campers participated in a map art activity. Using watercolors, they painted the pipes that led to the Sarita wetland also including animal and plant life on top, which are crucial elements in helping the Sarita do its job.
As a memento to the journeys of water, as well as the experiences of camp, the campers crafted necklaces with a vial containing water from the beginning (the downspout) of its journey to the end (Crosby State Park), all tied together with their beaded initials.

Written by Andreas Fenner
Posted by Unknown at 2:58 PM

Funding was provided by

Water Journey Camps is led by

Institute on the Environment posted this article on Mississippi River Water Journey Camps by Lauren Schultz. Read more at this LINK . Th... 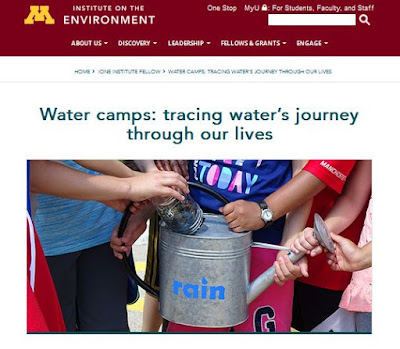 This is the place for information about the camps. As camps progress, we will post exciting updates about the campers' experiences and what they are making and doing related to their exploration of water. Check back soon to see what's new!